Boba desserts and snacks in Jakarta

The bubble tea craze has swept many of us Jakartans off our feet, and if you thought the delicious madness of boba wouldn’t grow into something even more mind-blowing, think again. We’ve found a whole range of boba desserts and dishes that spans from sweet to savoury.

From desserts like Boba Milk Tea Cake and Boba Ice Cream to unexpected finds like Boba Ramen and Boba Gyoza, adventurous foodies will want to try out the boba-fied dishes on this list.

1. Ichiro Ramen Market – ramen and gyoza with boba on top Ichiro Ramen Market is ready to make your jaw drop with its Boba Ramen and Gyoza. Instead of regular sweetened tapioca pearls, Ichiro Ramen tops its dishes with garlic-flavored boba which complements the taste of these iconic Japanese dishes.

Ichiro Ramen Market offers many different combinations of toppings and broths, but in case the boba component is enough of a surprise and you prefer to keep the noodle part simple, go for the Superior Chicken Ramen (Rp. 39,900, ~USD2.93) or Dry Abura Ramen (Rp. 43,000, ~USD3.15). There are four levels of spiciness, so you might want to keep it at level one or two if you can’t handle too much chilli.

There’s also gyoza, with either shrimp or chicken filling. Give the Teppan Gyoza (Rp. 51,000, ~USD3.74) a go and watch as the boba sizzles on a hot plate, alongside 10 pieces of decadent gyoza and a generous helping of special in-house sauce.

2. Hong Tang – boba and its buddies in a bowl There’s nothing quite like the pleasure of treating yourself to a cold dessert on a sweltering hot day. But instead of getting the usual grass jelly drink, ice cream or bubble tea, head to Hong Tang for a treat that combines all three in one bowl.

There are set combinations with four “bases” to choose from – Grass Jelly, Soya, Taro, and Ice Pudding. Each base has a basic bowl with various combinations of toppings, and boba is featured heavily in all of them because its chewiness complements the softness of the other components. Prices range between Rp. 37,000 (~USD2.71) and Rp. 45,000 (~USD3.30). Ban Ban might be known for its cheese tea and selection of bubble teas, but it also claims to be the first store in Asia to put boba on toast.

Try the Boba Pan (Rp. 29,000, ~USD2.13), which combines boba and cream cheese on a thick slice of brioche. The mild sweetness of the cream cheese really brings the bread and the boba together, making this a unique dessert with a balance of flavors and textures. Classy French toast and cake are boba-fied at Benedict. For a unique spin on a classic French toast for brunch, you’ve got to try the Boba French Toast (Rp. 60,000, ~USD4.40), which comes with a generous layer of cream cheese frosting and your favorite chewy black pearls on top. When you feel like having something sweet after a meal or just fancy an afternoon snack, then give the Boba Cake (Rp. 60,000, ~USD4.40) a try. The aromatic earl grey buttercream between layers of brown sugar cake already sounds great, but it gets even better with cream cheese frosting, crumble, and of course, boba. Fluffy pancakes that jiggle when you move the plate very rarely disappoint. They’re soft and melt in your mouth, and even though the pancakes already taste good as is, they go well with a lot of different toppings – including boba. The luscious black truffle soft-serve is topped with salted milk foam, truffle honey, and corn flakes for an added crunch. If you’re wondering where boba fits into this, take a peek at the bottom of this confection –  the mini pearls act as the foundation. For those who want a smaller dessert, try the Boba Milk Tea Cheese Tart (Rp. 27,000, ~USD1.98), which adds a unique touch to the already delicious mini cheese tart. You get the best of two very fashionable desserts. Ramen and gyoza aren’t the only savory dishes that our city’s snack joints have paired with boba. Baiza Sushi takes the trend even further by adding these chewy pearls on top of sushi, making them look like oversized ikura.

For Rp. 48,000 (~USD3.52), have a taste of the Roasted Spicy Salmon Boba. The fish, rice and boba are bound to start a party in your mouth, and it’ll be unlike any other sushi–eating experience you’ve ever had. The boba isn’t given any additional flavor, so it won’t disrupt the taste of the roasted salmon. It’s there to add texture to the sushi dish. To taste the salmon and boba without being distracted by the texture of rice, try the Salmon Salad Boba (Rp. 62,000, ~USD4.55).

Boba snacks in Jakarta that are not bubble tea

Boba isn’t always destined to be with sweet treats such as ice cream and cake – you’ll be surprised by how well it can blend with savory snacks as well. Expand your palate and try these unique boba-fied desserts and dishes next time you go on a snack hunt in Jakarta.

Check out our other food articles: 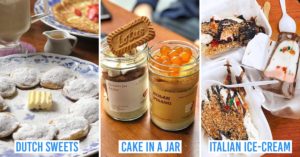 8 Jakarta Dessert Cafes With Sweet Treats That Taste As Good As They Look
Big Bad Wolf’s 24-Hour Book Sale Is Returning To Indonesia 6th-16th March 2020 With Up... 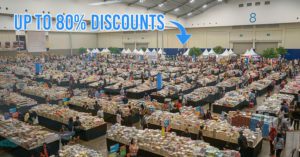