In a city as busy and crowded as Jakarta, you’ll see that cafes with good coffee aren’t hard to stumble upon, but unfortunately the same standards can’t always be said about dessert. Lots of sweet treats are impeccably decorated, but as soon as you take the first bite, you immediately feel betrayed.

The good news is that there are a handful of cafes in Jakarta that won’t only restore the optimism of sweet-toothed eaters, but also anyone who wants to have a taste of dessert done right. So check these cafes out next time you feel like you could use a satisfying sugar rush. In business since 1932, this legendary ice cream parlor continues to attract customers of all ages until today. Maintaining its old-timey interior, Ragusa can make anyone who goes there feel nostalgic. Even if you don’t have time to stick around, stopping by to get a box of ice cream to-go will make you feel as if you’ve jumped into a time machine. It’s easy to get here too: the parlor is located a 15 minutes’ straight walk from Central Jakarta’s busy Gambir Station.

Check out our video of Ragusa Es Italia here. Sophie Authentique has earned its reputation as one of South Jakarta’s homey French cafe chains as a result of the consistent quality of its authentique bread and pastries. You can choose from a variety of French delights, including the classic Bordeaux canelé, which starts from Rp. 32,000 (~USD2.29), and fragrant madeleines for Rp. 22,000 (~USD1.57).

Starting out as a tiny Kemang shop run by a French lady named Sophie, it has since branched out to reach more of the city’s pastry-craving residents. At its comfortable and lovingly decorated shops opened in accessible neighborhoods, including Cipete and Kuningan, you can stop by for a bite on your way to and from work. Pipiltin Cocoa is a local chocolatier with innovative recipes that woo chocolate lovers, but its ability to stick to its Indonesian roots is what makes fans stay and ask for more. What wins over eco-friendly eaters is that it supports local cocoa farmers. This is why the items on Pipiltin’s exquisite menu can get a little pricey, including its famous Rp. 60,000 (~USD4.30) chocolate bars, but it’s all in the spirit of giving locals a fair wage.

Not just popular in Indonesia, its chocolate has been getting some traction abroad, particularly in Japan. But it’s worth sitting down for their cafe’s assortment of yummy delicacies too – cakes, macaroons, pralines, you name it. You should also treat yourself to some superb hot chocolate, served in a cute Instagrammable egg-shaped cup, for Rp. 40,000 (~USD2.86). Come to Dijan’s if you want to try Dutch sweets in their original form. The restaurant might have an unassuming presence compared to the newer, hipper food places populating Kemang, but it’s been around for about 20 years.

Start with the pannenkoeken and poffertjes, which are Dutch-style pancakes. Prices start from Rp. 50,000 (~USD3.57), and the portions are rather generous so make sure you have space in your stomach when you go there. While poffertjes are not a rarity in Jakarta, not many stay true to their original form, making them look more like takoyaki balls.

Dijan’s has a calm atmosphere that feels welcoming any time of day. It also has a soothing backyard if you prefer to savor your warm pancakes outdoors. Over the past few years, Beau has won over the hearts of bakery lovers for its fresh French-influenced bread, as well as brunch-goers’ for its cozy atmosphere. Founded by ambitious pastry chef Talita Setyadi, Beau first appeared in breezy Cikajang to the joy of Jakarta’s enthusiastic cafe-hoppers. Dough Darlings is a Bali favorite that has recently brought its doughy excellence all the way to South Jakarta’s Cikajang neighborhood. Its Jakarta branch Kitchen by Dough Darlings serves heavy meals, as well as the famous chewy donuts.

Crafted by hand, this joint’s donuts are definitely unlike your average wheel-shaped goodness. Not only does the rich texture make you want to have more, but it also comes in unique flavors, such as the popular Strawberry Shortcake and Boba Brown Sugar that are Rp. 40,000 (~USD2.85) each. Namelaka is located in Menteng’s chic Shophaus, a compound of sought-after small cafes and salons. As Shophaus’s only cafe that’s devoted to dessert, it should definitely go on your must-visit list if you call yourself a sweet tooth.

With a range of cakes, pastries, and hip dessert jars, there’s something for everyone, even if you’re pretty neutral about sugary stuff. For a light bite, try the choux for Rp. 20,000 (USD $1.43) a piece, or if you’re in the mood for something more subtle, try a slice of the Coffee Caramel Hazelnut cake, which costs Rp. 50,000 (USD $3.57). If you’re looking for a classic European-syle patisserie in Jakarta, this little place in Menteng is the one for you. The name Chicory Patisserie might not instantly ring a bell, but its delicate pastries will instantly make you feel as if you’re in dessert heaven.

The rustic, cabinesque interior might make you forget that you’re in the center of Jakarta. Once you order a scrumptious Mixed Berry Cheesecake with fresh fruit and cream for Rp. 55,000 (~USD3.95), you’ll thank yourself for finding this pot of gold.

Where to get dessert in Jakarta

Whenever you feel like taking a bite of something sweet, you can turn to the places on this list as an alternative to the big franchises in every shopping mall. Sometimes, a cozy place serving delectable dessert is all you need to treat yourself. 8 Seminyak Restaurants, Cafes & Bars You Have To Visit On Your Next Bali Trip
8 Boba Desserts & Dishes That Are Not Bubble Tea, And Where To Get Them... 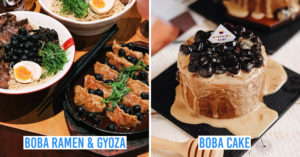